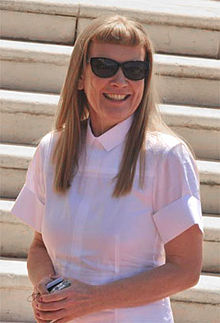 Andrea Arnold, OBE (born 5 April 1961) is an English filmmaker and former actress. She won an Academy Award for her short film Wasp in 2005 and has since made the leap to feature films and television, including Red Road, Fish Tank and American Honey, all of which have won the Jury Prize at the Cannes Film Festival. Most recently, she directed three episodes of the Emmy-winning series Transparent, as well as all seven episodes of the second season of Big Little Lies.

Interestingly, I never thought Id do an adaptation. Ive also been quite against them. I think trying to translate one medium to another is wrong. I never really felt that books fitted into film. Generally people are disappointed, arent they?

A lot of people have something to say about 'Wuthering Heights,' but nobody quite nails it.

Every time I start a film I feel like I'm starting the first time, ever.

I hear filmmakers saying, 'I wanted to make to make a film about this issue, or this theme,' but I never start like that.

I read loads. There's quite a lot of stuff online.

I always think that if you look at anyone in detail, you will have empathy for them because you recognize them as a human being, no matter what they've done.

Films are all about decisions, and that's what I love.

I do believe some people can naturally act and don't know it.

I grew up with a lot of Hollywood films. Cozy farm houses, cowboys, nice flats in New York. Especially as a kid, those things have a huge impression on you.

America is a huge country, of course. It's complicated. There's good, and there's not so good, and that's the same wherever you live.

When I was in New York I heard many people saying that the independent film industry was in big trouble. I was reflecting on this when I came home. Realizing that ever since I started filmmaking, people have being saying that. But somehow it keeps going. Filmmakers keep going. We need stories to make sense of the world and some people like me are driven to tell them. I have faith this will always be possible.

Whenever I get fed up with life I love to go wandering in nature.

I deliberately never read about films before I see them.

For me, making films is about trying to work something out by myself in quite a lonely way. I find the whole thing very lonely really.

Sleep your way to the top.

I grew up in a working-class family, so I guess you could say I write from what I know.

I don't feel very revengeful in life at all.

I just like doing things from my own head.

I work best when there is adversity: I seem to get calmer the more the fur is flying.

Dramatically, I like darkness, I like conflict - but I don't see the world as defined by them.