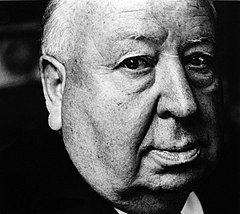 Sir Alfred Joseph Hitchcock KBE (13 August 1899 – 29 April 1980) was an English film director and producer, widely regarded as one of the most influential filmmakers in the history of cinema. Known as "the Master of Suspense", he directed 53 feature films[a] in a career spanning six decades, becoming as well-known as any of his actors thanks to his many interviews, his cameo roles in most of his films, and his hosting of Alfred Hitchcock Presents (1955–1965).

The paperback is very interesting but I find it will never replace the hardcover book - it makes a very poor doorstop.

San Francisco would be a good location for a murder mystery.

Our original title, you know, was `The Man in Lincoln`s Nose`. Couldn`t use it, though. They also wouldn`t let us shoot people on Mount Rushmore. Can`t deface a national monument. And it`s a pity, too, because I had a wonde.

Happiness is a small house, with a big kitchen.

For me, suspense doesn't have any value if it's not balanced by humor.

Cary Grant is the only actor I ever loved in my whole life.

The ideal husband understands every word his wife doesn't say.

It has been rumored that "Psycho" is so terrifying that it will scare some people speechless. Some of my men hopefully sent their wives to a screening. The women emerged badly shaken but still vigorously vocal.

We seem to have a compulsion these days to bury time capsules in order to give those people living in the next century or so some idea of what we are like.

There are several differences between a footballl game and a revolution. For one thing, a football game usually lasts longer and the participants wear uniforms. Also there are more injuries at a football game.

We seem to have a compulsion these days to bury time capsules in order to give those people living in the next century or so some idea of what we are like. I have prepared one of my own. I have placed some rather large samples of dynamite, gunpowder, and nitroglycerin. My time capsule is set to go off in the year 3000. It will show them what we are really like.

I have a feeling that inside you somewhere,there's somebody nobody knows about

Feelings, Nobody Knows, Knows, Nobody, Somebody

Kicking is very important in football. In fact, some of the more enthusiastic players even kick the ball, occasionally.

Television is like the invention of indoor plumbing. It didn't change people's habits. It just kept them inside the house.

One must never set up a murder. They must happen unexpectedly, as in life.

One never knows the ending. One has to die to know exactly what happens after death, although Catholics have their hopes.

There is nothing to winning, really. That is, if you happen to be blessed with a keen eye, an agile mind, and no scruples whatsoever.

Blondes make the best victims. They're like virgin snow that shows up the bloody footprints.

Everything's perverted in a different way.