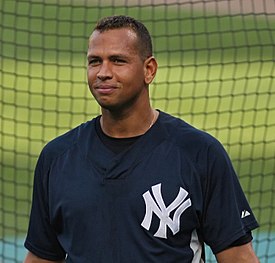 Alexander Emmanuel Rodriguez (born July 27, 1975), nicknamed "A-Rod", is a former professional baseball shortstop and third baseman. He played 22 seasons in Major League Baseball (MLB) for the Seattle Mariners, Texas Rangers, and New York Yankees. Rodriguez was one of the sport's most highly touted prospects and is considered one of the greatest baseball players of all time. Rodriguez amassed a .295 batting average, 696 home runs, over 2,000 runs batted in (RBI), over 2,000 runs scored, and over 3,000 hits. He is a 14-time All-Star and won three American League (AL) Most Valuable Player (MVP) Awards, ten Silver Slugger Awards, and two Gold Glove Awards. Rodríguez is the career record holder for grand slams with 25. He signed two of the most lucrative sports contracts in history, but his career was highly controversial. He incurred criticism from the media for his behavior and use of performance-enhancing drugs.

We (Derek Jeter and I) always talk about getting old, gray, and fat when our careers are over and just having a good time. He's like me. He wants to have a good time and be a good person. It's a weird situation for us. It's just like we're looking in the mirror. the only difference is I'm on the West Coast and he's on the East Coast.

I hate the word 'potential'-potential means you haven't gotten it done.

Enjoy your sweat because hard work doesn't guarantee success, but without it you don't have a chance.

Be respectful. Treat people the way you want to be treated. Respect the lowest rank and the highest rank and you'll never get in trouble.

I want to be known as Dominican-that's what I am, 100 percent. . . I have a duty and responsibility to continue the legacy of Dominicans in baseball.

Why do people sing Take Me Out to The Ballgame when they're already there?

I truly believe my job starts the minute I leave the baseball field. Going out and catching ground balls and hitting, that's a job, and that's what I've wanted to do ever since I was a kid. But when you think about leaving that field, that's when the job and the demands really start. In New York, Seattle, every city. The community, the media, business stuff. You have to stay on a narrow path.

You can take my cars or my house, just don't mess with my clothes.

Like I say, it's almost embarrassing to talk about. I don't know if Michael Jordan or Bill Gates or Alexander the Great or anyone is worth this type of money, but that's the market we're in today. That's what Mr. Hicks decided to pay me, and now it's time to pay him back and win a couple championships.

I love the challenge of the game. I love the work. My goal right now is to have a season next year that will make people forget about this one. I'll use things like this for motivation. I'm pumped. I'm hungry.

I want to build a positive image that will last my career.

I believe a champion wins in his mind first, then plays the game, not the other way around.

I've learned in my career, it is much better to be recognized for all the great things you do on the field.

Well, Milwaukee is a special place to me. It's where I started my career playing in Appleton. Getting cheered on the road is something I haven't been use to.

You must be present to win.

Baseball has a funny way to tap you on the shoulder when you least expect it and tells you it's the end.

I've never experienced- besides the birth of my two daughters-the feeling of winning a world championship in New York in the new stadium. It's something I'll never forget.

I'm not impulsive at all - except about buying clothes. That's my biggest weakness.

There is a difference between image and reputation. Image is nice. Reputation is developed over an entire career. Reputation is what I'm searching for.

It takes a lot of pressure off you just to go out and play, and your talent sometimes shines even more when you don't worry about individual stuff.