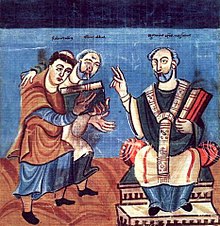 Alcuin of York (/ˈælkwɪn/; Latin: Flaccus Albinus Alcuinus; c. 735 – 19 May 804 AD)—also called Ealhwine, Alhwin or Alchoin—was an English scholar, clergyman, poet and teacher from York, Northumbria. He was born around 735 and became the student of Archbishop Ecgbert at York. At the invitation of Charlemagne, he became a leading scholar and teacher at the Carolingian court, where he remained a figure in the 780s and '90s.

Those people should not be listened to who keep saying the voice of the people is the voice of God, since the riotousness of the crowd is always very close to madness.

Here halt, I pray you, make a little stay. O wayfarer, to read what I have writ, And know by my fate what thy fate shall be. What thou art now, so shall thou be. The world's delight I followed with a heart Unsatisfied: ashes am I, and dust.

If many people follow your enthusiastic endeavours, perhaps a new Athens might be created in the land of the Franks, or rather a much better one.

Nec audiendi qui solent dicere, vox populi, vox Dei, quum tumultuositas vulgi semper insaniae proxima sit. We should not listen to those who like to affirm that the voice of the people is the voice of God, for the tumult of the masses is truly close to madness.

Men can be attracted but not forced to the faith. You may drive people to baptism, (but) you won't move them one step further in religion.

What has Ingeld to do with Christ?