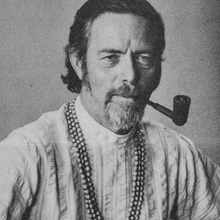 Alan Wilson Watts (6 January 1915 – 16 November 1973) was a British philosopher, writer, and speaker, best known as an interpreter and populariser of Eastern philosophy for a Western audience. Born in Chislehurst, England, he moved to the United States in 1938 and began Zen training in New York. Pursuing a career, he attended Seabury-Western Theological Seminary, where he received a master's degree in theology. Watts became an Episcopal priest in 1945, then left the ministry in 1950 and moved to California, where he joined the faculty of the American Academy of Asian Studies.

A less 'brainy-culture' would learn to synchronise its body rhythms rather than its clocks.

The world is in an extremely dangerous situation, and serious diseases often require the risk of a dangerous cure like the Pasteur serum for rabies.

To have faith is to trust yourself to the water. When you swim you don't grab hold of the water, because if you do you will sink and drown. Instead you relax, and float.

It is hard indeed to notice anything for which the languages available to us have no description.

So many people of wealth understand much more about making and saving money than about using and enjoying it. They fail to live because they are always preparing to live.

We think that the world is limited and explained by its past. We tend to think that what happened in the past determines what is going to happen next, and we do not see that it is exactly the other way around! What is always the source of the world is the present; the past doesn't explain a thing. The past trails behind the present like the wake of a ship and eventually disappears.

The problem is to overcome the ingrained disbelief in the power of winning nature by love, in the gentle (ju) way (do) of turning with the skid, of controlling ourselves by cooperating with ourselves.

There are two specific objections to use of psychedelic drugs. First,use of these drugs may be dangerous. Howev er,every worth-while exploration is dangerous-climb ing mountains,testi ng aircraft,rocket ing into outer space,or collecting botanical specimens in jungles. But if you value knowledge & the actual delight of exploration more than mere duration of uneventful life,you are willing to take the risks.

Our pleasures are not material pleasures, but symbols of pleasure – attractively packaged but inferior in content.

We do not "come into" this world; we come out of it, as leaves from a tree.

Thought is a means of concealing Truth.

Of what use is the universe? What is the practical application of a million galaxies? Yet just because it has no use, it has a use- which may sound like a paradox, but is not. What, for instance, is the use of playing music? If you play to make money, to outdo some other artist, to be a person of culture, or to improve your mind, you are not really playing- for your mind is not on the music. You don't swing. When you come to think of it, playing or listening to music is a pure luxury, an addiction, a waste of valuable time and money for nothing more than making elaborate patterns of sound.

Problems that remain persistently insoluble should always be suspected as questions asked in the wrong way.

No amount of anxiety makes any difference to anything that is going to happen.

You are something that the whole world is doing just as when the sea has waves on it.

The style of God venerated in the church, mosque, or synagogue seems completely different from the style of the natural universe.

The most strongly enforced of all known taboos is the taboo against knowing who or what you really are behind the mask of your apparently separate, independent, and isolated ego.

There is no formula for generating the authentic warmth of love. It cannot be copied. You cannot talk yourself into it or rouse it by straining at the emotions or by dedicating yourself solemnly to the service ofmankind. Everyone has love, but it can only come out when he is convinced of the impossibility and the frustration of trying to love himself. This conviction will not come through condemnations, through hatingoneself, through calling self love bad names in the universe. It comes only in the awareness that one has no self to love.

The harder we try to catch hold of the moment, to seize a pleasant sensation. . . , the more elusive it becomes. . . It is like trying to clutch water in one's hands - the harder one grips, the faster it slips through one's fingers.