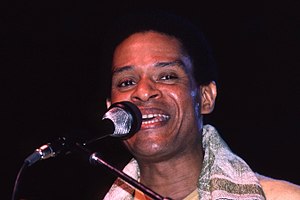 Alwin Lopez "Al" Jarreau (March 12, 1940 – February 12, 2017) was an American singer and musician. He received a total of seven Grammy Awards and was nominated for over a dozen more. Jarreau is perhaps best known for his 1981 album Breakin' Away. He also sang the theme song of the late-1980s television series Moonlighting, and was among the performers on the 1985 charity song "We Are the World."

I sat on the piano bench next to my mother in church. Something happened before I set foot on this planet. I was crawling around inside of her. She was a church pianist. My dad was a brilliant singer. I was hearing it.

I discovered is that I have a couple of valves that were leaky and had been giving, gave me a problem then. But I hadn't noticed anything up until then. A couple of incidents of shortness of breath and checked myself into a hospital, but that one in France really sat me down for a few minutes - a very few minutes, because seven days later I was in the studio, and eight days later, I was no the stage.

Every day is Thanksgiving. On this stage you're going to hear God and none of them other words, and I ain't going to touch my stuff.

I really do see it as the start of the second half of my career.

I've been saying for almost 20 years that I need to do a jazz project and it ought to be either big band or I should do some jazz songs with a trio or quartet.

I'm walking every day and just staying kind of fit, and try not to have too many bad habits. Keep it minimal.

That's the way I try to live. I think it's the only way for human beings at this point in our evolution as souls, where everyone in their lifetime is going through stuff.

I would still be singing, because it's part of my heart and my soul, and it lifts me up. Find something you would do for free.

Before I get out of bed, I am saying thank you. I know how important it is to be thankful.

Al and Tommy and I sharing the biggest laugh because it was predicted by everything we did in the first three or four records in my career. It was predicted in the grooves that we would be here sometime later on down the road.

I did a concert at five years old in the garden of one of the church members, and we raised some money to buy a new piano in our little church.

To sing the ballad with a knowingness about what you are talking about. If it's somebody else's lyric, and the message is a little unusual for you, it requires that you learn that new message.

These songs are old friends I have entertained myself with when I'm washing the dishes, driving to the store and walking down the aisles. The ones that you sing when you're driving in the car and as a singer you always go back to them.

I know more polkas than Frankie Yankovic. I grew up next door to the Polka Tavern in Milwaukee. I can sing some polkas. And proud of that.

Let that get you up in the morning and put the light in your eyes. I'm telling you, it makes you a better husband, mother, father, neighbor, citizen, when you have that light in your eye, that you feel so good, and you're a pleasant person to be around. "Good morning, sir. Did you find everything that you need? Oh, that's over in aisle seven. I'll come help you as soon as," that's the stuff. Find something. It could be planting flowers, especially if you can watch it.

It's all background experience and listening and exposure. That's why it's so important for people today and during any time to expose your children to lots of different kinds of things.

My eyes went blank, and I stared off, and the music started. It was raining, and the sun was shining at the same time, and there were these big bay windows, and there was the blue in the sky, and the sun on the trees, and it was drizzling.

I was age six or seven, and singing, "Jesus wants me for her son, beep, to shine for him," and people smiled and pinched my cheeks till the blood vessels broke, and I knew I was doing something right.

I don't know where we got the notion that God wants us to suffer. Every living thing tends toward the good or we would have been gone a long time ago.