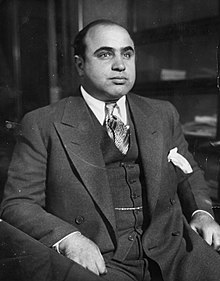 Alphonse Gabriel Capone (/ˈæl kəˈpoʊn/; Italian: [kaˈpone]; January 17, 1899 – January 25, 1947), sometimes known by the nickname "Scarface", was an American mobster, crime boss, and businessman who attained notoriety during the Prohibition era as the co-founder and boss of the Chicago Outfit. His seven-year reign as crime boss ended when he was 33.

Public service is my motto.

I don't even know what street Canada is on.

I have built my organization upon fear.

Now I know why tigers eat their young.

Bolshevism is knocking at our gates, we can't afford to let it in. . . We must keep America whole and safe and unspoiled. We must keep the worker away from red literature and red ruses; we must see that his mind remains healthy.

Be careful who you call your friends. I’d rather have four quarters than one hundred pennies.

Baths, Chow, Down, Down And, Needs, Talk

I am like any other man. All I do is supply a demand.

I got nothing against the honest cop on the beat. You just have them transferred someplace where they can't do you any harm. But don't ever talk to me about the honor of police captains or judges. If they couldn't be bought they wouldn't have the job.

Against, Jobs, Judging, Nothing, Police

You accomplish more with a smile, a handshake, and a gun than you do with just a smile and a handshake.

I am going to St. Petersburg, Florida, tomorrow. Let the worthy citizens of Chicago get their liquor the best they can. I'm sick of the job-it's a thankless one and full of grief. I've been spending the best years of my life as a public benefactor.

I'm a kind person, I'm kind to everyone, but if you are unkind to me, then kindness is not what you'll remember me for

My rackets are run on strictly American lines and they're going to stay that way.

A crook is a crook, and there's something healthy about his frankness in the matter. But any guy who pretends he is enforcing the law and steals on his authority is a swell snake. The worst type of these punks is the big politician. You can only get a little of his time because he spends so much time covering up that no one will know that he is a thief. A hard-working crook will-and can-get those birds by the dozen, but right down in his heart he won't depend on them-hates the sight of them.

They've hung everything on me except the Chicago fire.

All I ever did was supply a demand that was pretty popular.

Hell must be a pretty swell spot, because the guys that invented religion have sure been trying hard to keep everybody else out.