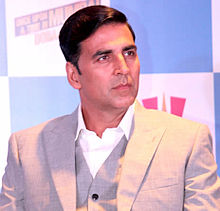 Akshay Kumar (born Rajiv Hari Om Bhatia; 9 September 1967), is an Indian origin actor, producer, martial artist, stuntman and television personality, who works in Bollywood films, and currently holds Canadian citizenship. In a career spanning more than twenty five years, Kumar has appeared in over a hundred Hindi films and has won several awards including the National Film Award for Best Actor for his performance in Rustom and two Filmfare Awards.

Work is work, but family is for life. That's what really matters to me.

I'd never do a film that would hurt anyone's sentiments, be it Indian or not.

People want to see realism in action now. People want the actors to perform than the computers performing. Though I have done both, I enjoy the realism of action more.

It's the best thing if your work is your passion in life. It makes me feel like I'm always on break.

I have dabbled with action, romance, dance, emotion and comedy. I think I've done well in all. It's important to keep doing something different and reinvent oneself to avoid stagnation from creeping in.

To be honest I had learnt martial arts for a girl. So I started learning the art to impress her, but eventually I started loving martial art more than the girl. So later it became a habit it became fun.

I always call myself a stuntman first and then an actor.

My love for sports will never die. I love martial arts and I want to promote it in whichever way I can. I am a fighter first, then an actor.

Each one of us has his own place in the industry. I've been able to prove that you don't necessarily have to be a Khan to be successful!

It drives me nuts how I rely on my wife for everything. I can't imagine a day without her!

I see the friends I made over the years who have become family today, people I became acquainted with who have achieved so much in their lives. They taught me something with each meeting.

I am so glad people have started making films n martial arts and self-defense, which is actually the need of the hour.

Most of the films are only 60% taken, rest is a director's input.

I'll do at least one action film every year because of my fans. This is my promise to them.

I always check my harness before I do a stunt; I test-drive the cars I have to race or explode; I'm present at all pyrotechnical rehearsals; and I walk through everything step-by-step. No man should put their life in someone else's hands unless they have covered their own safety from all angles.

I do not stick to rules when cooking. I rely on my imagination.

For a guy who used to steal watches on the streets of Chandni Chowk for kicks, I surely think my success at the age of 22 was pretty early!

I'm an athletic actor. I'm known for my action; I'm a guy who does my own stunts on screen.