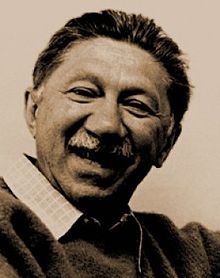 Abraham Harold Maslow (/ˈmæzloʊ/; April 1, 1908 – June 8, 1970) was an American psychologist who was best known for creating Maslow's hierarchy of needs, a theory of psychological health predicated on fulfilling innate human needs in priority, culminating in self-actualization. Maslow was a psychology professor at Alliant International University, Brandeis University, Brooklyn College, New School for Social Research, and Columbia University. He stressed the importance of focusing on the positive qualities in people, as opposed to treating them as a "bag of symptoms." A Review of General Psychology survey, published in 2002, ranked Maslow as the tenth most cited psychologist of the 20th century.

The best way to view a present problem is to give it all you've got, to study it and its nature, to perceive within it the intrinsic interrelationships, to discover the answer to the problem within the problem itself.

We may define therapy as a search for value.

In a word, to perceive an object abstractly means not to perceive some aspects of it. It clearly implies selection of some attributes, rejection of other attributes, creation or distortion of still others. We make of it what we wish. We create it.

Fear of knowing is very deeply a fear of doing.

The job is, if we are willing to take it seriously, to help ourselves to be more perfectly what we are, to be more full, more actualizing, more realizing in fact, what we are in potentiality.

We have got to abandon the sense of amazement in the face of creativity, as if it were a miracle if anybody created anything.

To the man who only has a hammer, everything he encounters begins to look like a nail.

One cannot choose wisely for a life unless he dares to listen to himself, his own self, at each moment of his life.

We are not in a position in which we have nothing to work with. We already have capacities, talents, direction, missions, callings.

Life is an ongoing process of choosing between safety (out of fear and need for defense) and risk (for the sake of progress and growth). Make the growth choice a dozen times a day.

Creative people are all there, totally immersed, fascinated and absorbed in the present, in the current situation, in the here-now, with the matter-in-hand.

The search for safety takes its clearest form. . . in the compulsive-obsessive neurosis. . . to frantically order and stabilize the world so that no unmanageable, unexpected or unfamiliar dangers will ever appear.

It seems that the necessary thing to do is not to fear mistakes, to plunge in, to do the best that one can, hoping to learn enough from blunders to correct them eventually.

The theory of science which permits and encourages the exclusion of so much that is true and real and existent cannot be considered a comprehensive science.

We crave and fear becoming truly ourselves

A positive self image and healthy self esteem is based on approval, acceptance and recognition from others; but also upon actual accomplishments, achievements and success upon the realistic self confidence which ensues.

Acceptance, Accomplishments, Ensues, Self, Self Confidence, Self Esteem

We are dealing with a fundamental characteristic, inherent in human nature, a potentiality given to all or most human beings at birth, which most often is lost or buried or inhibited as the person gets enculturated.

What is life for? Life is for you.

Healing, Life, Life Is, What Is Life

People are not evil; they are schlemiels.