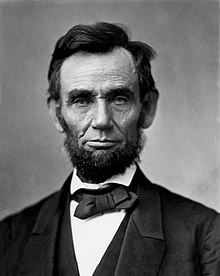 Abraham Lincoln (February 12, 1809 – April 15, 1865) was an American statesman and lawyer who served as the 16th President of the United States from March 1861 until his assassination in April 1865. Lincoln led the United States through its Civil War—its bloodiest war and perhaps its greatest moral, constitutional, and political crisis. In doing so, he preserved the Union, abolished slavery, strengthened the federal government, and modernized the economy.

It is easiest to "be all things to all men," but it is not honest. Self-respect must be sacrificed every hour in the day.

Day, Hours In The Day, Men, Sacrificed, Self, Things

If they do kill me, I shall never die another death.

We should be too big to take offense and too noble to give it.

That some achieve great success, is proof to all that others can achieve it as well.

Again I admonish you not to be turned from your stern purpose of defending your beloved country and its free institutions by any arguments urged by ambitious and designing men, but stand fast to the Union and the old flag.

Seriously, I do not think I fit for the presidency.

Everyone likes a good quote - don't forget to share.

He has a right to criticize, who has a heart to help.

It is better then, to save the work while it is begun. You have done the labor; maintain it - keep it. If men choose to serve you, go with them; but as you have made up your organization upon principle, stand by it; for as surely as God reigns over you, and has inspired your mind, and given you a sense of propriety, and continues to give you hope, so surely will you still cling to these ideas, and you will at last come back after your wanderings, merely to do your work over again.

A husband and wife may be divorced and go out of the presence and beyond the reach of each other, but the different parts of our country can not do this. They can but remain face to face, and intercourse, either amicable or hostile, must continue between them.

Marriage is neither heaven nor hell, it is simply purgatory.

I am satisfied that when the Almighty wants me to do or not do any particular thing, He finds a way of letting me know it

A woman is the only thing I am afraid of that I know will not hurt me.

Neither party expected for the war, the magnitude, or the duration, which it has already attained. Neither anticipated that the cause of the conflict might cease with, or even before, the conflict itself should cease.

Intoxicated with unbroken success, we have become too self sufficient to feel the necessity of redeeming and preserving grace, too proud to pray to the God that made us.

Politicians are a set of men who have interests aside from the interests of the people and who, to say the most of them, are, taken as a mass, at least one long step removed from honest men

I have not permitted myself, gentlemen, to conclude that I am the best man in the country; but I am reminded, in this connection, of a story of an old Dutch farmer, who remarked to a companion once that "it was not best to swap horses when crossing streams. "